Taking a closer look at (the bumps on) sagebrush 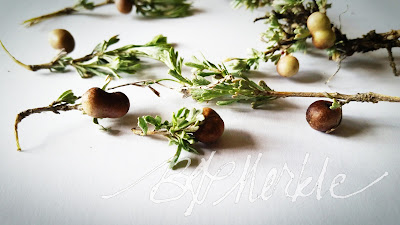 Last weekend, I was out hiking in an area of southwest Wyoming resplendent with big sagebrush.

The little growths were less than an inch across, many much smaller, and ranged from chestnut brown to pale greenish-pink. They were spongy to the touch, and appeared to be covered in tiny hairs.

Not wanting to dally too long, I snapped a photo for reference and moved on. Later, I shared the photo on Twitter, to see if anyone with an entomology background could point me toward relevant information. 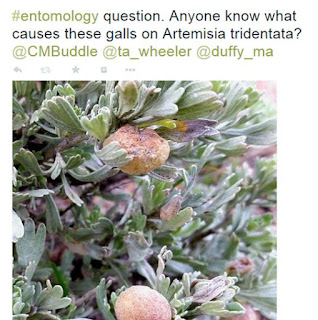 Crowdsourcing paid off, and I started reading science articles about Cecidomyiidae, a family of tiny flies (midges) that might have up to 100,000 species.

Realizing how many insects there were to 'choose' from, I wasn't convinced I'd be able to figure out the exact one that caused the galls I'd spotted. Happily, my Twitter source, Canadian ecologist Terry Wheeler, figured the galls were caused by something in the Rhopalomyia genus, which led me to work by Ruth Hufbauer, an ecologist in Colorado, who has studied these exact galls.

This week's column
In the syndicated column, I explore the history and social uses/concerns associated with gall-producing insects, take a look at their general ecology, and dwell on the fact that we don't really know much about these diverse, numerous, and complex creatures.

The following illustration accompanies the column, which is available to subscribers of publications running Drawn to the West as a syndicated column. 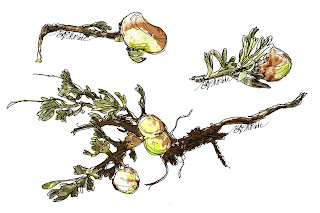 If you'd like to read the column, let your local newspaper or magazine editor know you want to see an illustrated version of the West in their publication! 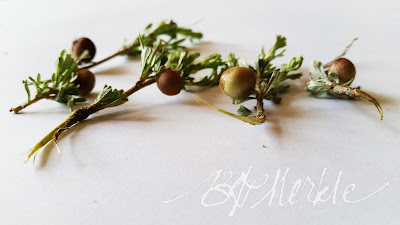 The big take-away is that 'our' scientific understanding of galls (including those on sage) is still in its infancy. It seems we have a descriptive/observation-based understanding (excluding agricultural pests which have likely been studied intensively):
Beyond that, we don't really have a detailed grasp of galls' ecological significance. For example, some questions I was bouncing around with a handful of ecologists over dinner Wednesday night included: 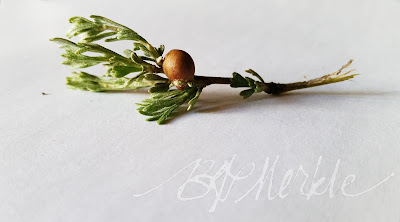 References
Below are the references I used to develop the sagebrush gall article. I found reading them fascinating. If you are not able to view a particular article (due to journal paywalls), contact the author for a copy. 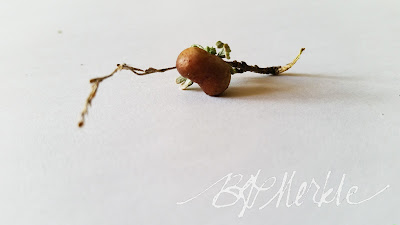 Click to view these titles and many other recommendations:
-Are you a ladybug?
-Backyard Birds
-Bumblebee Economics
-Fish Forever
-Mapmaking with Children
-The Nature Connection: An Outdoor Workbook