Although the Northwest Territories are more likely to be lumped with "the North" than "the West"...

...technically, Tulit'a - a small Dene First Nations community of ~500 inhabitants - sits at 125.5775° W. That means it is further west than most of the United States and Canada, aside from some regions of coastal Alaska, Hawaii and British Columbia's islands. For perspective, coastal California is only ~123° W. 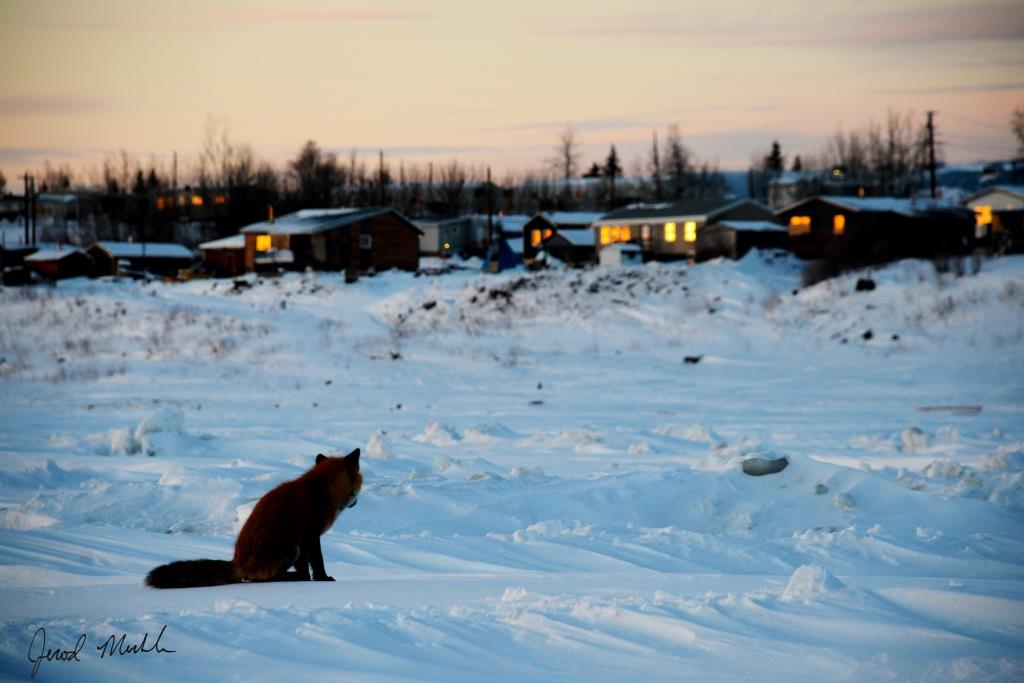 I made this geographic discovery just this evening, while discussing the longitude of the village wherein my husband and I, our puppy, and some friends (plus two more dogs) are blizzard-bound. Incidentally, we're only two degrees south of the Arctic Circle; between the boreal forest and the weather, it feels like it. 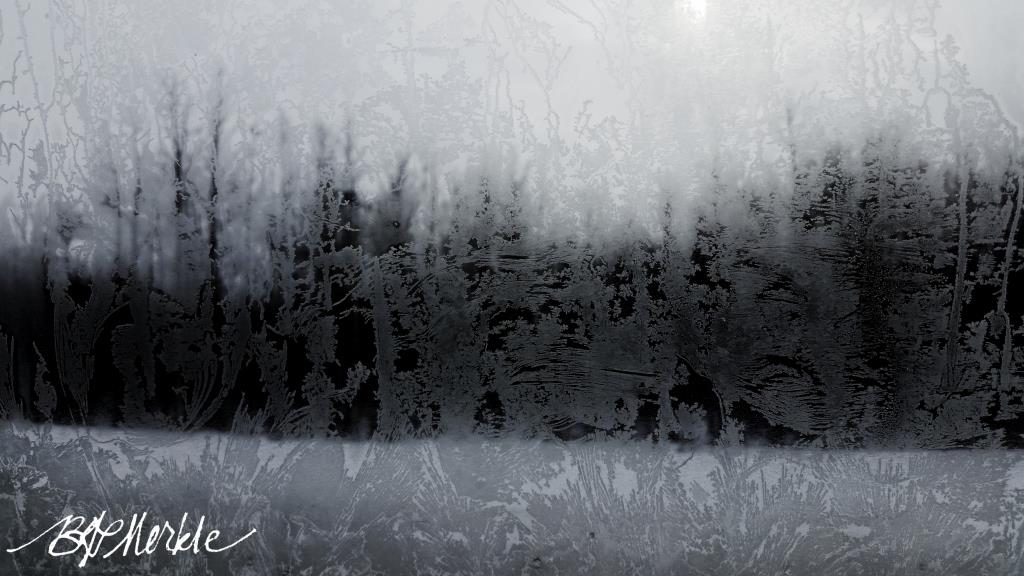 We arrived here on Friday morning, after 2,337 miles packed into a car with Bob (father of the friend who lives up here in the NWT), three dogs (one very anxious), loads of gear, and so much food purchased at southern prices that there wasn't room to cross our legs. While Stella and Butterball were forced to snug in the back, our pup Brio - balanced on his favorite blanket draped across our laps - slept his way north. Three must be the numeric theme for the trip, as we drove that way for three days! 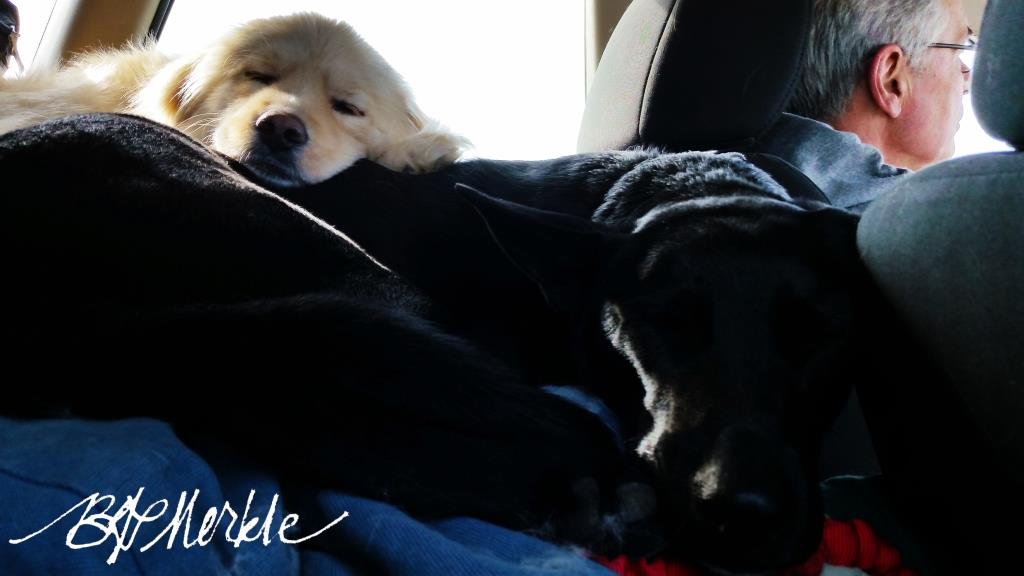 The last 150 miles were on a winter road complete with two river crossings (on ice nearly 10 feet thick). Driving that last stretch took between 7-8.5 hours - a drive which followed an already full day of driving on snow-packed gravel roads. We drove for almost 24 straight hours, because none of the small motels between High Level, Alberta and Tulit'a welcome dogs. 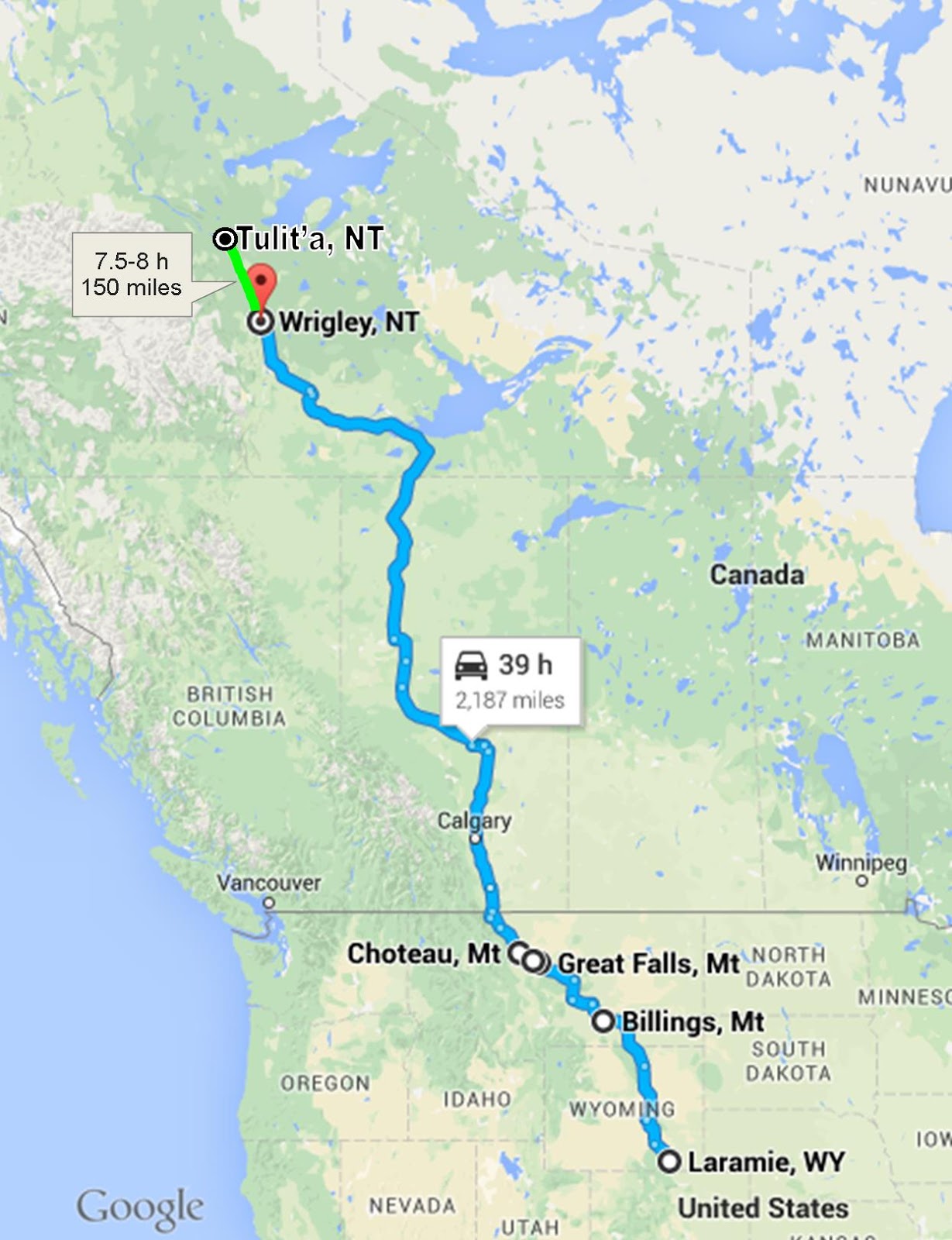 This might be because three dogs sounds like a wrecked room waiting to happen, or because it is culturally unusual to keep dogs indoors up here. Either way, it was an epic trip, complete with an episode of desperate negotiating with a winter-road grader operator when our overloaded Subaru nearly bottomed out (twice!) in a huge water-and-ice-filled set of potholes we couldn't clear.

The situation was desperate because we were over 30 miles along on the winter road, and our only alternative appeared to be turning around, driving over an hour (yep, we averaged about 30-35 mph on it), and hoping to find a motel in the tiny town where the all-weather road ends and the winter road begins. Wrigley might have a motel - no one we've asked in Tulit'a knows because no one ever stops there. If such a motel exists, it almost certainly does not take dogs, which means we likely would have taken shifts sleeping with the dogs in the car.

Long after the sun had dropped along with our hopes of reaching Tulit'a, we felt a huge rush of relief when the grader operator agreed to plow a bypass. Upon learning we did not have a radio - and knowing, though we did not - that there was no cell phone service between Wrigley and Tulit'a (the full distance of the winter road), the grader told us to follow a maroon Ford truck that had just started down the bypass.

A ways up the road, we pulled up to the truck stopped alongside the road, because both driver and passenger were standing outside. They, too, asked if we had a radio, and then gestured for us to drive ahead of them. They reassured us that they had a cable, and would pull us out of anything we couldn't get out of ourselves. The couple was headed to Fort Good Hope (another 4-5 hours beyond Tulit'a!) for a traditional game competition (hand games explanation).

We had another escort, of a sort. Unbeknownst to us, Jean waiting for us in Tulit'a, had used a CB radio to check our progress with truckers. She knew we were getting through when, fairly near to town, a trucker said, "Oh, yeah. I think I saw them. They're the ones with all that stuff tied to the top, right?"

By that time, as Jerod so aptly put it, we felt like we'd spent the day in a video game - dodging ruts and potholes big enough to swallow the car, jolting along on frozen ruts like a children's amusement park train ride, and plunging over hilltops into one rollercoaster-steep creek crossing after another.

Though we doubted the outcome more than once, we made it.
Bleary eyed. Joints seized up. Dogs gone nuts from three days of sleeping. Giddy with the knowledge that it could be a long time - maybe forever - before we endured a journey so grueling again.


If you'd like to read the column, let your local newspaper or magazine editor know you want to see an illustrated version of the West in their publication!
Posted by Unknown at 9:32 AM

Click to view these titles and many other recommendations:
-Are you a ladybug?
-Backyard Birds
-Bumblebee Economics
-Fish Forever
-Mapmaking with Children
-The Nature Connection: An Outdoor Workbook